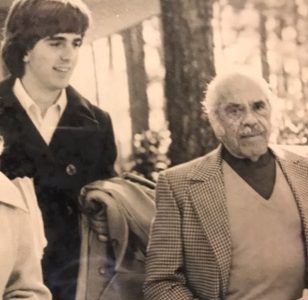 Playwright Garson Kanin once said, “I’d rather be Frank Capra than God—if there is a Capra.” He’s my favorite film director. Three-times an Oscar-winner for best director, Capra began in movies not all that long after movies had begun themselves, writing gags for the Little Rascals and Will Rogers, and later, the Keystone Kops and Harry Langdon. Everyone knows IT’S A WONDERFUL LIFE, but that’s probably only his fourth or fifth best film.

I had the very good luck to spend a day with the legend himself when he was doing a lecture series at Clayton Junior College in 1979. Capra was then 81. He was far from old and decrepit. The day I spent with him, he gave four hours of media interviews, three hours of lectures and spent two hours doing meet and greets and was still going strong.

Not surprising for one of the world’s greatest comedy auteurs, he had a terrific sense of humor. When he told a funny story from the silent movie era, Mack Sennett and Will Rogers practically sprang to life before your eyes. When he told an anecdote about a dance sequence that was inexplicably edited into one of his films in India to keep the audience’s attention, he did a near perfect rendition of a Bollywood dance to demonstrate.

Capra was also a great humanitarian like the message he conveyed in his films. He seemed to really care about the young film students he met. He tried to share what he had learned from a long and successful career.

“I have lectured to respect hunches. Hunches for me are more important than logic. Don’t mix logic and creativity—trust your intuition, that’s creativity knocking at your door. There’s no way to predict how an audience will react. It sounds unreal in this day when we have this much technology—but you can’t pigeonhole the human spirit. Humanity isn’t a checkerboard. Each person is so very complicated that nobody can predict their reaction to a scene. An audience is unpredictable. Yet it is the third dimension of film. Film in a can is worthless. It has no value without an audience. The third dimension is the reaction—as individuals they may like it, but as a group they may hate it. But if you take 500 free people and put them in your theatre—they will always be right.”

If you are looking for a great summer read, check out Capra’s THE NAME ABOVE THE TITLE, very possibly the best autobiography to come out of Hollywood.